Local rail passengers in line for major improvements from next year 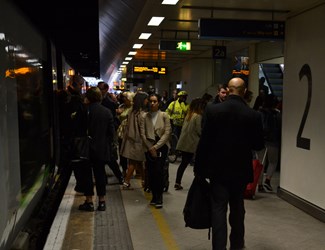 A wide range of passenger benefits have been included in a ground breaking document which lays out the minimum specifications to be met by whichever train operator wins the next West Midlands franchise due to start in October 2017.

The Invitation to Tender document and the passenger improvements it contains has been drawn up by the Department for Transport (DfT) in collaboration with West Midlands Rail (WMR), a consortium of all 14 metropolitan, shire and unitary authorities in the wider region.

One major improvement in the new franchise will be an increase in Sunday services to the same level of frequency currently seen on Saturdays. This will apply to nearly all local routes and together with more evening services is aimed at better reflecting modern working and leisure patterns.

The increases, along with a doubling of off-peak services between Birmingham and Shrewsbury and a new, direct peak time service between Walsall and London are among a number of improvements resulting from WMR's influence in the design of the new franchise.

The new franchise will also be part managed by WMR allowing more local control and influence over services - something which currently rests with central Government.

Cllr Mark Winnington, chair of West Midlands Rail and Staffordshire County Council's cabinet member for economic growth, said: "Today's announcement is a game changer in that it is the first time the region has had this level of involvement in shaping what a train company has to deliver for local passengers.

"The region has come together to grab this devolution opportunity with both hands and we believe that together with the DfT we have set out a railway that brings real benefits not only for passengers but also for local businesses while supporting economic growth and jobs.

"The authorities of the West Midlands are united in this and believe the region better understands what it needs from its railway and that having greater responsibility for its management is good for passengers, good for the economy and good for taxpayers."

Other improvements set out in the Invitation to Tender include:

Announcing the Invitation to Tender, Rail Minister Paul Maynard said: "We are making the biggest investment in the railways since the Victorian era and today marks a key step forward in giving passengers better journeys across the West Midlands and beyond.

"This franchise serves both commuters and long distance passengers and these benefits will deliver extra and smoother journeys for customers using these services."

Train companies bidding for the franchise are being encouraged to include proposals for additional benefits over and above the minimum requirements published today.

It follows an extensive public consultation which attracted almost 2,000 responses.

2. West Midlands Rail Ltd is the body owned by WMR Partner Authorities and would be responsible for overseeing local rail services under a devolved system.

3. The shortlisted bidders for the franchise are:

London and West Midlands Railway Limited, a subsidiary of Govia Limited (a joint venture between Keolis and Go-Ahead Group).

Bidders for the West Midlands franchise have until 29 November 2016 to submit their bids, with the new operator planned to take over the franchise in October 2017.